The other day I updated my search for photos or items connected to the bowling alleys my dad and I bowled in – both together and separately – over the years. I think I’ve drawn as close to having found everything that remains out there. On those occasions when I find myself in those towns again, I’ll dig around and see if something is there.

While that search winds down another one is also drawing to a successful close. In addition to being avid bowlers, we both liked to hit the links. We’d played golf in several states: California, North Dakota, New Mexico and Texas. I’ve also played in Nevada, Colorado, and Nebraska. 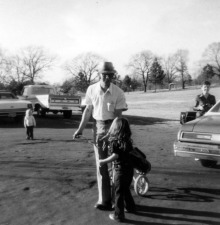 For the most part, I’d kept scorecards and bought logo balls for most of the courses. But a few slipped by, mostly due to the course not having a logo ball. I’ve got it down to three courses – all three in Texas – that I don’t have a logo ball for. I’m at 100% on the scorecards and photos.

And that black and white photo is dad being greeted by my sister, Chantel, after a round of golf in Mineola, Texas in 1977.

I’ve also been chasing any photos or news clippings of Dad’s high school playing days. He played football and basketball in the late 50s and very early 60s. Unfortunately, game photos are almost non-existent. But I’ve found some news clippings, programs and headshots from school yearbooks.

When we were packing up dad’s things in Texas, we came across two yearbooks for Sabine Pass High in Texas. One had him in it but the other was while he was in elementary school. I have the one yearbook he’s in, that stays in the family as long as any of us live, but the other one I sent down to Sabine Pass High. That’s the cover of the 1957 Sabine Pass High yearbook that is now back in their library’s collection.

A few years ago one of the hurricanes that torment the Gulf Coast states all but scoured the town off the face of the earth. The high school was completely destroyed and nothing of it survived. They never even found any debris. The school was rebuilt and has been slowly gathering up what little remains of its history.

The yearbook I sent to them is the oldest yearbook they have in their possession. I’m pretty sure dad would have wanted them to have it once he was gone. I know they are very thrilled to have it and I hope to visit Sabine Pass soon and see it in their library.

Who knows, maybe one day by dad hanging on to that yearbook for over sixty years and my sending it back home, we’ll have helped someone find a piece of their family’s lost history.

And to be honest, that’s almost as cool as all of the things I’ve been able to track down over the past 13 months in our own family history.

Be sure and sign up for my newsletter: Postcards From Infinity for updates, news and special offers. You'll get a free e-book too.